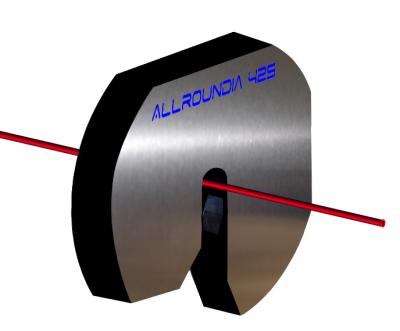 Press Facts
Inline profile measurement of extruded tubes and sections
Pixargus at “Tube 2010”: Node controller and optical dimension control combined into one innovative, economic system
AllRounDia™ reduces start-up loss and material use
Würselen, Germany, April 12, 2010. At Tube 2010 Pixargus will present its new AllRounDia™ system for optical inline measurement of extruded tubes and sections. This system for the first time combines the functions of a “node controller” with those of a “diameter and ovality measuring system” into a single reasonably priced device.
Optical dimension control of extruded products, such as hoses, cables or tubing, used to require at least two different measuring devices, on the one hand, so-called node controllers for speedy detection of bulging and necking and, on the other hand, sensors for profile measurements. The latter operate with very high precision but need quite some time for mean value calculation.
Pixargus has combined both functions into one compact system, which can be conveniently integrated into existing production lines. The system not only saves costs and installation space, but also makes for easier handling. Working with high-capacity mini-PCs, AllRounDia™ provides numerous new operating and evaluation features - similar to those offered by the high-end systems of the Pixargus PCDX-360 series.
AllRounDia™ performs diameter and ovality measurements in three axes with an accuracy of 1 to 2 µm at a scanning rate of up to 36,000 measurements per second. These performance data make the system suitable for production speeds of more than 1,000 m/min.
By building on its experience from developments in the high-end profile measurement segment, Pixargus has been able to save on manufacturing costs and realize the value added provided by AllRounDia™ at a reasonable cost-benefit ratio. The system distinguishes itself from conventional laser micrometers in that it dispenses with a rotating mirror. This gives it a unique level of availability in daily operating routine, as no wear parts need to be replaced.
With the 8” touchscreen display the operator is provided with a state-of-the-art and flexible interface for convenient control of all system functions. Connectivity with the production control system and the intranet (LAN) is guaranteed by various interfaces, including Ethernet 10/100 Mbit and RS485. AllRounDia™ is delivered plug-and-play in a pre-calibrated state with all basic functions ready for operation. This minimizes the time needed by the customer for commissioning the system.
As the system features an integrated industrial PC, it can be expanded at any time. Any software upgrades for additional functions will in the future be available for download at www.allroundia.de. AllRounDia™ is designed to integrate additional lighting elements and cameras. This provides the option of upgrading it to a Pixargus Dual-Head System with full-scale surface inspection capabilities.
At Tube 2010 Pixargus will present a system with a measuring range between 0 and 28 mm. Other measuring ranges will be available soon.
2,900 characters including blanks
Pixargus at Tube in Düsseldorf on 12 – 16 April 2010:
Hall 05, Stand D01

Caption: AllRounDia™ for the first time combines the functions of a “node controller” with those of a “diameter and ovality measuring system” into a single reasonably priced device.
File name: Pixargus_Allroundia-425.bmp
About Pixargus
Pixargus develops and manufactures systems for optical inline measurement and inspection of plastic and rubber profiles. Established in 1999 as a spin-off of the Institute of Plastics Processing (Institut für Kunststoffverarbeitung IKV) of the Technical University RWTH of Aachen/Germany, Pixargus has specialized in optical quality control of extruded products made of plastics and rubber.
Pixargus systems inspect sealing profiles – for example, for the automotive industry – and tubing, catheters, cables or window seals as well as raw material (compounds) made of thermoplastic elastomers (TPE) and rubber. Additionally, Pixargus offers systems for the inspection of - textured, woven or non-woven - web material.
Worldwide almost all major manufacturers of automotive rubber and TPE profiles use Pixargus systems for surface inspection and profile measurements.
The company, based in Aachen/Germany, is active worldwide through its US branch and various international technical agencies.