Green benefits of all-electric tube benders to be highlighted 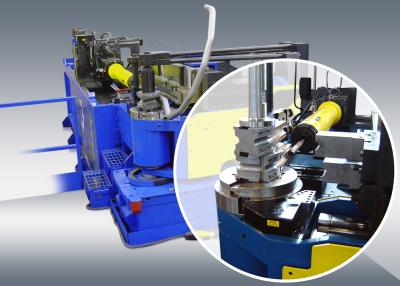 Based in Scarborough (UK) - officially the most enterprising place in Europe* - Unison is the UK's only manufacturer of all-electric tube benders and the cost savings and environmental benefits of its innovative machine architecture are proving to be a major factor in many current sales. Unison was also recently named as Yorkshire's 'Most Enterprising Company Of The Year'.

Unison machines only consume any significant amount of energy when actually performing a bend. A conventional hydraulically powered bender, by contrast, typically consumes energy continually, as the system's fluid has to be maintained at pressure. As an example of the energy savings, even one of the largest all-electric benders on the market today - capable of bending 150 mm/6-inch outside diameter tubing - draws only up to 14-15A/phase peak for a few seconds during bend and correction operations, before returning to its standby state which has a consumption of just 2-3A/phase.

A further major green attribute of all-electric tube bending machinery is the virtual elimination of scrap. This is particularly advantageous for manufacturers dealing with exotic alloy tubing, and those that manufacture in small batches. When setting up a conventional hydraulic tube-bending machine for a batch, it's fairly common to create one or more pieces of scrap before the desired shape is achieved. All-electric machines can recall the program and replicate the set-up conditions precisely using software, thanks to the closed-loop nature of the control.

One remaining problem with regard to scrap has been variations in the 'springback' characteristics of materials that sometimes occur when tubing from a different manufacturing batch or supplier is used. The availability of laser measurement systems for tube benders is helping to eliminate scrap from this cause. The laser system works by monitoring changes in the reflection distance of two laser beams. In operation it takes a reference measurement from the straight edge of the tubing. Then, after the bend is made, the system automatically commands the clamping die to move away - allowing the material to spring to its natural position - and takes a second measurement from which the actual bend angle is calculated. Any difference to the programmed bend is displayed, along with a simple selection button that commands the machine to automatically re-grip the tube and apply an additional force to achieve the required angle. The system has proved extremely successful in use. As a result, one of the first users has now been able to ignore his previous methodology of making and storing details of some sample bends to determine a new tubing material's fixed and proportional springback characteristics. Instead, the user simply makes the programmed bend. Then, while the part is still on the tube bender, the laser system automatically takes over and corrects as required - eliminating scrap.

Users will also be able to sign up to attend an innovative tour demonstrating the productivity benefits of servomotor-controlled tube bending. Unison will take attendees to see how at least two UK users of the technology exploit the advanced technology.