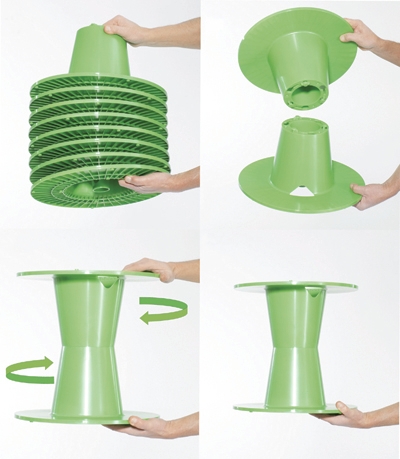 At the wire 2010, Hafner will introduce the DEMOPAC® 385 product range. The new innovative packaging reel for the cable industry has 2 halves each consisting of a flange and a cone, which can be assembled with an easy twist by hand. The barrel has a bi-conical shape with regular flat flanges.

All the spools have a common flange diameter of 385mm and a cone diameter of 140mm. Hafner offers the DEMOPAC® 385-60 and the DEMOPAC® 385-180. Variations of the two halves allow a combination of 3 alternative winding widths of 120, 240 and 360mm. The reels are designed for automatic winders and have anti slip pins on the flange to secure safe stacking of the reels.

The conical shaped barrel allows for a very compact stacking of the spool halves. The number of transported spools is three fold in comparison to conventional reels.
This does not only reduce transport costs, but also reduces the emission of carbon dioxide.

As well as the DEMOPAC® reels, Hafner will take the opportunity to showcase some of their latest product developments, these include: