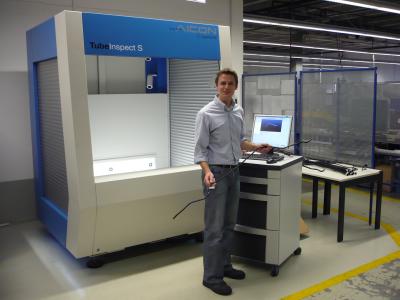 TI Automotive is, as the name suggests, a global supplier in the automotive sector. As a leading manufacturer of fuel storage and fluid carrying systems for braking and powertrain applications, the company cultivates worldwide relationships with all important automakers. Today, approximately 30 million cars built every year rely on TI’s technology.

The location Fuldabrück in Germany is specialized in manufacturing prototypes of fuel pipes. Since these are made of plastic, they cannot be bent with a conventional bending machine. Instead, they are processed by thermal forming. The quality of the formed pipes is assured by Daniel Bock who monitors the whole manufacturing process. For example, he has to make sure that the geometry of a produced prototype is having exact size according to the drawing. In order to check the contour of a prototype, it is measured in two stages: once directly after thermal forming, a second time after the assembly of add-on components like flanges or brackets.

In the past, these measurements were conducted with the help of gauges and other mechanical inspection tools. Daniel Bock reports: “The drawback of traditional methods is that the measuring results depend very much on the operator. Moreover, the reports derived from these measurements don’t comply with the current requirements in respect of verifiability. To improve the quality of the measurement results, we thought about inspecting the pipes with an articulated arm, that means by probing of pre-defined measuring points. However, when observing measurement service providers, we saw that the measurements done with an articulated arm were very complex and time-consuming. To be honest, I have been reluctant to accept this effort. This is no solution for the workaday application in our prototype production.”

Hence, Daniel Bock started searching for another metrological alternative: “Due to earlier projects, I have already been familiar with the principle of optical measurement” says Daniel Bock. “Therefore, I have considered it possible to use this technology for the measurement of our pipes too. I visited several trade fairs for quality assurance to find the right solution for our requirements. In doing so, I suddenly came across AICON’s optical tube measuring system TubeInspect. Originally this system was not made for measuring plastic pipes. However, thanks to a vivid information exchange and a clear definition of our demands, AICON was in the position to quickly upgrade TubeInspect’s software correspondingly. Finally the system was implemented in our plant in June 2008. And we can totally rely on this measuring machine.”

TubeInspect is an optical gauge for the measurement of formed tubes, pipes and wires. For acquiring a pipe’s geometry, the object to be measured is simply placed in the optical measuring cell. By capturing the tube with several high-resolution digital cameras TubeInspect measures accurately the 3D geometry in a few seconds. The results are reported in an easily understandable way which allows for an unambiguous evaluation right on site.

Usually, plastic pipes are a true challenge for measuring machines because the material is flexible, causing that straight lines fade to curved parts fluently. In order to get precise measurement values for a comparison of nominal to actual data, the measuring system has to respect the elasticity of the plastic pipes. In TubeInspect’s software, the user can now chose an elasticity value specific to the material. This value reflects the flexibility of the pipe. Thus, TubeInspect’s measuring results are highly accurate.

TI particularly appreciates the enormous time savings gained with TubeInspect. On the one hand, each prototype of a new plastic pipe can immediately be measured with the system. The fabrication of special gauges and the related waiting time until the gauge is ready for operation are a thing of the past. On the other hand, TI Automotive is now in the position to detect deviations from the nominal pipe geometry very early. “With TubeInspect we can give our suppliers support for the production of the bending moulds at an incredibly early stage. Already the first manufactured pipe is measureable without any difficulty. As a consequence, our suppliers are instantly able to manufacture the bending moulds in an accurately fitting way”, explains Daniel Bock.

Furthermore, TubeInspect fulfils the requirements regarding the checkability of the measurement results. The automatically generated report does not leave any room for interpretation by the operator. Daniel Bock tells from his experience: ”Our customers want to have a proof of the pipe’s accuracy. TubeInspect outputs a coordinate table that can be controlled by everyone – that means also by our customers. This satisfies them much more than the old, usual reports. As some of our customers, for example Volkswagen, also own a TubeInspect system, we even profit from synergy effects.”

Concluding, Daniel Bock outlines: “TubeInspect gets us a great competitive advantage, especially in the tendering stage. We wouldn’t want to miss our optical measuring system anymore.”