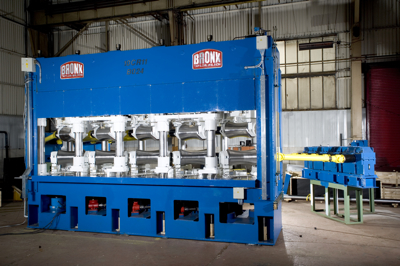 When it comes to pipe testing and straightening machines throughout the world, one name has become synonymous with innovation, customization and quality:
Bronx/Taylor-Wilson (BTW). In 2010, BTW will celebrate its 70th Anniversary of providing technologically superior solutions in pipe testing and finishing. In the last decade alone, BTW has supplied leading pipe manufacturers with 75 new straightening installations and 25 new pipe testing installations. Undoubtedly, Bronx/Taylor-Wilson has become the world’s technological choice for pipe
testing and finishing.

South America: In South America, Bronx/Taylor-Wilson’s resume includes over 50 installations for several customers including Vallourec & Mannesman in Brazil and several Tenaris plants throughout Venezuela, Brazil and Argentina. Currently, Bronx/Taylor-Wilson is in the design and manufacturing stages for Vallourec & Mannesmann Sumitomo Corporation for a Hydrostatic Pipe Tester which requires pressures that have never been accomplished on such high yield equipment for API standard 5CT/5L product diameter ranging from 177.8 mm to 406.4 mm. The Hydrotesters will be designed to withstand an end load of 8043 KN for 406.4 mm OD casing. This end load is the highest of any product that will
be tested at such diameters.

Europe & Scandanavia: Bronx/Taylor-Wilson roots in Europe date back to 1940 and the Bronx Engineering Company. With over 630 installations BTW equipment can be found in the majority of European metals producers, including Corus, Mittal Steel, CMC, Vallourec & Mannesman, Dalmine, Jansen, and Tyssen. Of BTW’s 70 installations in Scandanavia, the most recent include a Section Straightener at Fundia Works to process bulb flat sections as well as equal and unequal angles and flats and a full-automated 10-Roll Tube Straightener to handle light-wall material for Sandvik.

Africa & The Middle East: BTW’s storied history throughout South Africa includes a complete finishing line at Mittal Steel and several BTW Cross Roll Straighteners are installed in most of the major tube and pipe producers in South Africa.
One the more recent contracts awarded to Bronx/Taylor-Wilson in the Middle East is from is from Jesco in Saudi Arabia. BTW is currently working on two Hydrostatic Pipe Testers for for a 13-3/8 API Machine and a 16 inch API Machine both of which test pressures of 85 MPA. Additionally, the contract calls for
two Series 6.CR.11 Machines that will be processing a diameter range of 177.8 to 406.4 mm diameter at yield strengths above 165,000 psi. The Bronx/Taylor-Wilson Heavy-Duty Pipe Straightener design has set the standard worldwide for straightening the top quality API and GOST quality pipes in the most arduous of mill conditions.

Russia: Bronx/Taylor-Wilson has enjoyed tremendous success in Russia with over 20 installations. Several BTW Pipe Straighteners are installed in all the major OCTG pipe producers within the Russian market including a 13-5/8” Six-roll Fully-Automated Pipe Straightener at VYKSA and two BTW Hydrostatic Pipe Testers at TMK which are capable of testing seamless 7” product at alternative API pressures up to 150 mpa. This pressure had never been introduced to pipe testers of this size and has made TMK the only producer prepared for the ever changing requirements of the API standards. In 2009 Bronx/Taylor-Wilson installed and successfully commissioned a Hydrotester at Tagmet in Russia
for API 5CT product up to 273.1 mm at pressures above 100 MPA. This is Bronx/Taylor-Wilson’s fourth high pressure machine for the TMK group in Russia. The most recent shipments were to the Interpipe Group for a 339.7mm, 125 Mpa API Pipe Testing Machine and and additional Series 6.CR.11 Pipe
Straightening Machine processing high grade 346 mm thick wall pipe at yields strengths of 165,000 psi. BTW is also designing and manufacturing another series 6.CR.11 Pipe Straightener for Interpipe and a 10-Roll High Precision Straightener for TMK’s Sinara plant which will process diameters ranging from 16-125mm. Lastly, Bronx/Taylor-Wilson is in the process of manufacturing another Series 6.CR.11 Pipe Straightener for the TMK Seversky plant to process diameters ranging from 168 to 377 mm.

Australia: The worldwide presence of Bronx/Taylor-Wilson has also reached as far as the continent of Australia. With approximately 20 installations throughout Australia, BTW is recognized as a leading supplier of finishing equipment in Australia.

Bronx/Taylor-Wilson Pipe Testing and Straightening Machines have a global reputation & admiration for their unsurpassed innovation and quality.