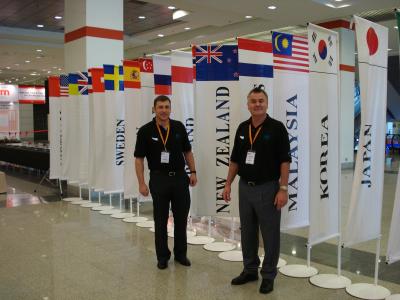 Mike Seager had not long stepped off the plane from attending a trade fair in Bangkok when I spoke to him, and in a couple of days he was about to step on another bound for China – his 37th trip to the Peoples’ Republic in just four years.

This is what it takes to build sales in new markets – get face-to-face with your customers and potential customers – and arguably the best forum for this is an international trade fair that caters specifically to your industry niche.

Seager, along with managing director Neil Spencer, heads PWT Limited – an R&D business that focuses on process technologies for the galvanised wire industries. The company has developed a unique electro-magnetic wiping (Quantum-EMW) system that delivers a major improvement in production efficiencies, product quality and cost savings for the world’s wire manufacturers. The system can be applied to new galvanising lines and retro-fitted onto existing lines. It’s also environmentally and operator friendly.

PWT’s entire target market lies offshore – primarily China, where they’ve already sold 16 units, but also Japan and Korea, where they’ve sold a similar amount.The two directors quickly realised that to sell their technology to potential buyers, they would have to meet as many as they could where they all congregate under the one roof. In 2007 that strategy led them to exhibit at Interwire in Cleveland (before the Chinese mills had a major impact on North America’s wire manufacturing industry) and visit Wire South-east Asia in Bangkok.

In 2008, it was off to Düsseldorf in Germany to visit the international Wire & Tube, the world’s biggest wire show spanning five massive halls. Later that year they exhibited at Wire China in Shanghai, the second biggest show. Seager describes the foot traffic there as “vast”.This year it was back to Cleveland, then a stand at Wire Russia in Moscow, where the market is still in its infancy, on to Wire Asia in Tianjin, China, and then Bangkok again.PWT has already secured space at Düsseldorf and Shanghai for 2010.

The nature of the Quantum-EMW equipment means that a lot of time passes between initial contact and eventual sale – and this is why it’s important to use the fairs as a means of moving discussions forward, says Seager. “You normally won’t seal a contract during a fair – you’re planting the seeds for prospective buyers and explaining the technology. But there’s no doubt that the fairs secure business.” In China, where wire factory management involves several layers, securing that business can take a long time – it pays to be patient.
Seager is grateful to the trade fairs for also providing the opportunity to network with various government and industry agencies, such as the China Wire Association. He says a partnership company based in China has been instrumental in opening doors for PWT Limited.

Also instrumental in opening doors has been NZTE, which awarded the company a grant to assist with marketing and selling its products. Seager says this funding has gone a long way towards travel, exhibiting costs, accommodation and marketing literature, and without that support they simply would not have attended the same number of fairs. “It’s been absolutely vital – but unfortunately we hear that government cutbacks might mean there’s no more funding available after this year.”