A Symphony in Steel 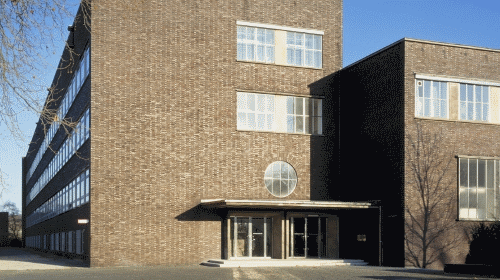 What makes iron stable in high temperatures? Material scientists have long occupied themselves with this question, which is of huge importance both for steel manufacturing and for steel processing.
Now, with completely new theoretical approaches and complex experimental studies, researchers from the Computer-supported Material Design department at the Max Planck Institute of Iron Research (MPIE) in Düsseldorf, in collaboration with colleagues from the California Institute of Technology (Caltech), have managed to get to the bottom of this question. 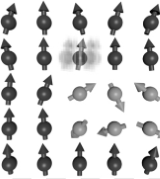 Iron is one of the crystalline materials, that is, the iron atoms are arranged in a grid and possess a certain structure. As the temperature increases, the atoms begin to oscillate around their places in the grid more and more, similarly to the strings of a violin when they are bowed or plucked more strongly. Here, scientists speak of grid oscillations.

With steels that consist chiefly of magnetic iron atoms, these atomic oscillations are accompanied by magnetic stimuli. For this, one can imagine each iron atom as a small magnet that turns its alignment in high temperatures and, in similar fashion to the closing of flute valves, creates its very own 'sounds' in such a double act due to the new condition.

Atomic oscillations and magnetic stimuli impact on the stability of steels in high temperatures. Here, one can imagine the iron atoms (depicted as balls in the image) as small magnets that turn their alignment when the temperature increases (grey arrows). The newly developed method allows the mutual impact of atomic oscillations and magnetic stimuli across the complete temperature range to be calculated for the first time. © Max-Planck-Institut für Eisenforschung GmbH

It has long been suspected that the stability of iron in high temperatures is due to a connection of the atomic oscillations and magnetic stimuli. Even in an orchestra, players of stringed instruments and players of wind instruments do not play independently of each other, but specifically look for resonances and harmonies. Previously, however, it was neither experimentally nor theoretically possible to ‘listen to’ such atomic symphonies.

A method newly developed at MPIE that combines concepts from a wide variety of branches of theoretical physics now allows the researchers to determine the mutual impact of the two atomic symphonists across the complete temperature range for the first time. “It has already been speculated for a few years that the structural stability of iron is closely linked to interaction between the magnetic stimuli and the atomic movement. We are very pleased that we are now able to describe this connection and also that our theoretical predictions accord with the measurements of our experimental colleagues at Caltech,” says Fritz Körmann, a scientist at MPIE. In the process, this influence, called magnon-phonon interaction in physics, showed itself to be unexpectedly strong and decisive for the stability of steels at several 100°C.

The theoretical predictions of the scientists at MPIE were experimentally supported by a team of Caltech scientists. For this, X-ray radiation experiments were carried out and assessed in detail at the renowned Argonne National Laboratory in the USA.

The result also impressed Brent Fultz, leader of the experimental study and a professor of material sciences and applied physics at Caltech: “Typically, we assume that the interaction between two independent processes is small. The detailed analysis of the measurements to determine the interatomic forces shows us how heavily the grid oscillations are influenced by magnetism. This was shown even more impressively in the computer simulations, in which it is possible to switch the interaction on and off.” 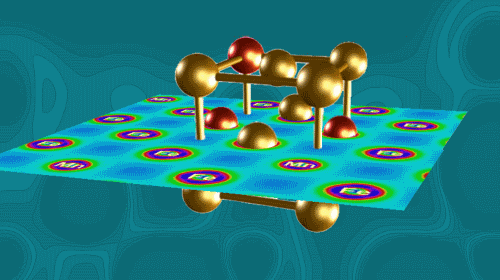 The Computer-supported Material Design (CM) department has set itself the objective of advancing the development and application of hierarchical and fully parameter-free (ab initio) multi-scale methods in an innovative fashion in order to simulate iron, steel and related materials with unprecedented accuracy. © Max-Planck-Institut für Eisenforschung GmbH

The new insights into the interactions and the thermodynamic stability of iron form a basis for the systematic development and design of new high-temperature steels.

"The fact that we are now able to decipher the fundamental mechanisms responsible for the thermodynamic phase diagram of iron, which is so important to steel development, is thanks to the systematic development of new computer-supported methods by Fritz, Tilmann and Blazej [1] in the last few years,” says Jörg Neugebauer, Director of the Computer-supported Material Design department (CM) at the Max Planck Institute of Iron Research.

“Only through the combination of various scientific approaches, for example from quantum mechanics, statistical mechanics and thermodynamics, and through the use of powerful supercomputers, did it become possible to understand the complex and previously not understood dynamic phenomena in one of the technologically most important structural materials.” 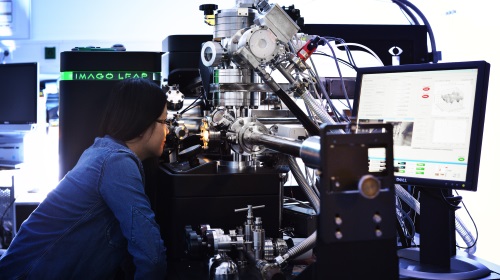 The scientists are currently focusing on iron-manganese steels, such as TRIP steels (TRIP stands for transformation induced plasticity), which are characterised by their high level of solidity and, at the same time, good deformability.

For this reason, the theoretical concepts at MPIE are now being generalised to such an extent that materials with a wide variety of alloying components can be treated. For just as an orchestra does not consist just of violins and trumpets, a steel also lives from the interplay between a wide variety of elements. So there is still much more music in this material.

[1] The reference is to Fritz Körmann, Tilmann Hickel and Blazej Grabowski, all of them scientists in the ‘Computer-supported Material Design‘ department at MPIE and authors of the original publication.